Dermocosmetics
Home›Dermocosmetics›Laser-assisted protocol of facial aesthetics for the management of acne and pigmentation: a case report

Laser-assisted protocol of facial aesthetics for the management of acne and pigmentation: a case report

Over the past few decades, the demand for cosmetic procedures has increased dramatically around the world. Facial aesthetic procedures remain one of the most requested and desired procedures due to their direct impact on the overall perception of beauty. [1,2]. Among the treatments available in facial aesthetics, minimally invasive techniques are increasingly popular due to their relatively low risk of complications and faster recovery time compared to surgical procedures. [2-4]. In this context, lasers with specific wavelengths and parameters and if applied under a certain protocol can show imposing results on the overall facial treatment [5]. For example, a multitude of studies have demonstrated that the use of lasers can stimulate the formation of collagen fibers and fibroblasts, increase local vascularization and significantly disinfect tissues due to their bactericidal effect. [5-9]. Additionally, if used appropriately, lasers can increase the absorption of serums, leading to a better reaction and therefore better results. [10]. Again, to achieve these results, conditions such as the use of an appropriate laser wavelength, optimal settings and protocols must be applied. [11]. The objective of this case report was to evaluate an innovative minimally invasive approach for the treatment of acne and facial pigmentation. The treatment protocol consisted of an in-office laser-assisted facial treatment with three different wavelengths, 980 nm, 405 nm and 635 nm (ST-Stomatology, Lasotronix, Poland), coupled with an application of concentrated rejuvenating serum.

A 24-year-old woman with no systemic condition presented to our polyclinic complaining of her unsightly facial appearance. Clinical diagnosis revealed the presence of excessive acne on the forehead and both cheeks and some localized pigmentation (Figure 1). As a therapeutic option, a laser-assisted facial aesthetic protocol based on the use of three different wavelengths coupled with a rejuvenating concentrated serum has been proposed. The patient confirmed acceptance of the treatment and written informed consent was obtained from her after explaining the steps, possible side effects and limitations of the procedure. Additionally, written informed consent was obtained from the patient indicating that all facial photos of this case may be released.

Figure
1: Clinical aspect of the face before any intervention.

Thorough skin cleansing was performed as a preparatory step before laser irradiation. The objective was to remove impurities from the skin and promote the penetration of light and cream into the soft tissues. A skin cleansing gel (Tebiskin Sooth-Clean, Tebiskin, SkinMed, Italy) was spread on the face, left for about 30 seconds, then rinsed thoroughly with water.

Irradiation with a 980 nm diode laser

A 980 nm diode laser (ST-Stomatology, Lasotronix, Poland) was used after cleaning the skin. The irradiation parameters were as follows: power of 8 W, continuous mode, non-contact mode with a distance of 1 cm from the target, and a tip of 200 µm in core diameter and 200 cm in length. The irradiation was carried out for 540 seconds (nine minutes) on the total surface of the face. The time period was divided into 180 seconds for each part of the face (the face was divided into three parts as explained above). The purpose of irradiation with the 980 nm diode laser was to warm up the face to allow the cream to penetrate the deeper layers of the skin.

Irradiation with a 405 nm diode laser

After using the 980 nm wavelength, a 405 nm diode laser was used (ST-Stomatology, Lasotronix, Poland). The same protocol as described with the 980 nm diode laser was used for the 405 nm wavelength but with the following parameters: power of 320 mW/cm2energy density of 30 J/cm2, continuous mode, and a contact mode with a 14 mm applicator tip, for three minutes per quadrant. The purpose of the 405 nm wavelength was to increase skin disinfection by killing bacteria, viruses and fungi.

At this stage of the treatment, the Gluage serum was applied. The vial ampoule (Cytoceuticals, TEBISKIN Gluage, SkinMed, Italy) has been properly mixed with Vitamin C for about one minute before applying to the face. The operator’s gloves were removed, then the serum was applied to the previously irradiated area of ​​the face, and in a gentle massage, the serum was spread over the entire face so as to obtain a thin layer visible at the naked eye (Figure 2). 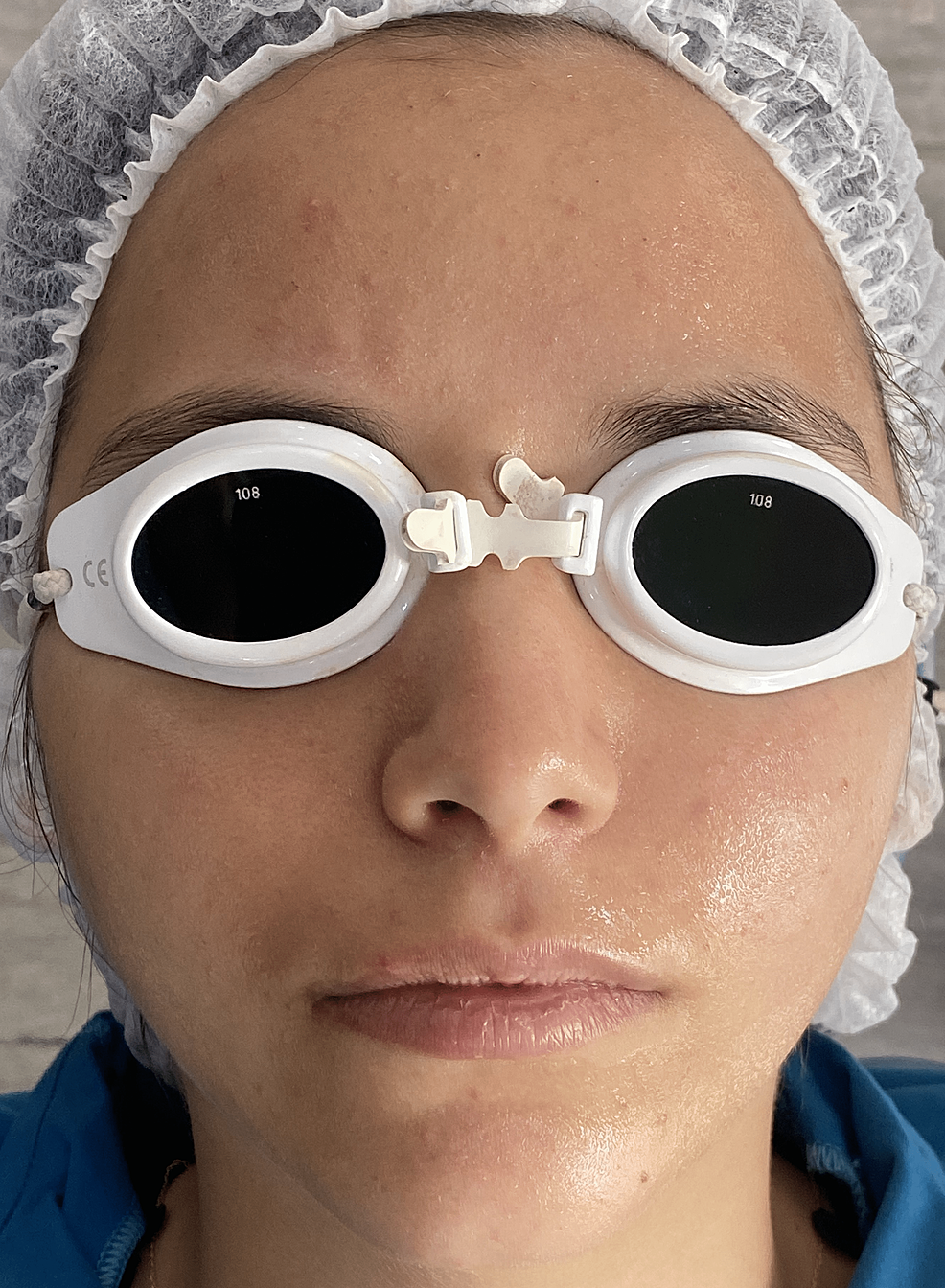 Figure
2: Clinical appearance of the face after application of the Gluage serum.

Irradiation with a 635 nm diode laser

After waiting three minutes, the 635 nm wavelength was used (ST-Stomatology, Lasotronix, Poland). The protocol was exactly the same as with 980 nm and 405 nm but with different parameters. The parameters at this stage were: power of 400 mW, energy dose of 20 J/cm2, continuous mode, contact mode, and a 14 mm tip. The aim was to stimulate the production of collagen fibers and improve the penetration of the serum’s active ingredients, thus further moisturizing the skin. At this point, a post-laser face cream (Tebiskin Post Laser Care (PLC), SkinMed, Italy) was applied and the face was massaged thoroughly for three minutes.

After a total of three sessions performed over a three-week period (one session per week), there was an almost total disappearance of acne and facial pigmentation (Figure 3). The patient and the operator were satisfied with the results obtained after each application, and finally, at the third session, a decision was made to stop the treatment due to the satisfactory results obtained. Moreover, this protocol did not show any side effects, pain or discomfort during and/or after the treatment and in the three months of follow-up. 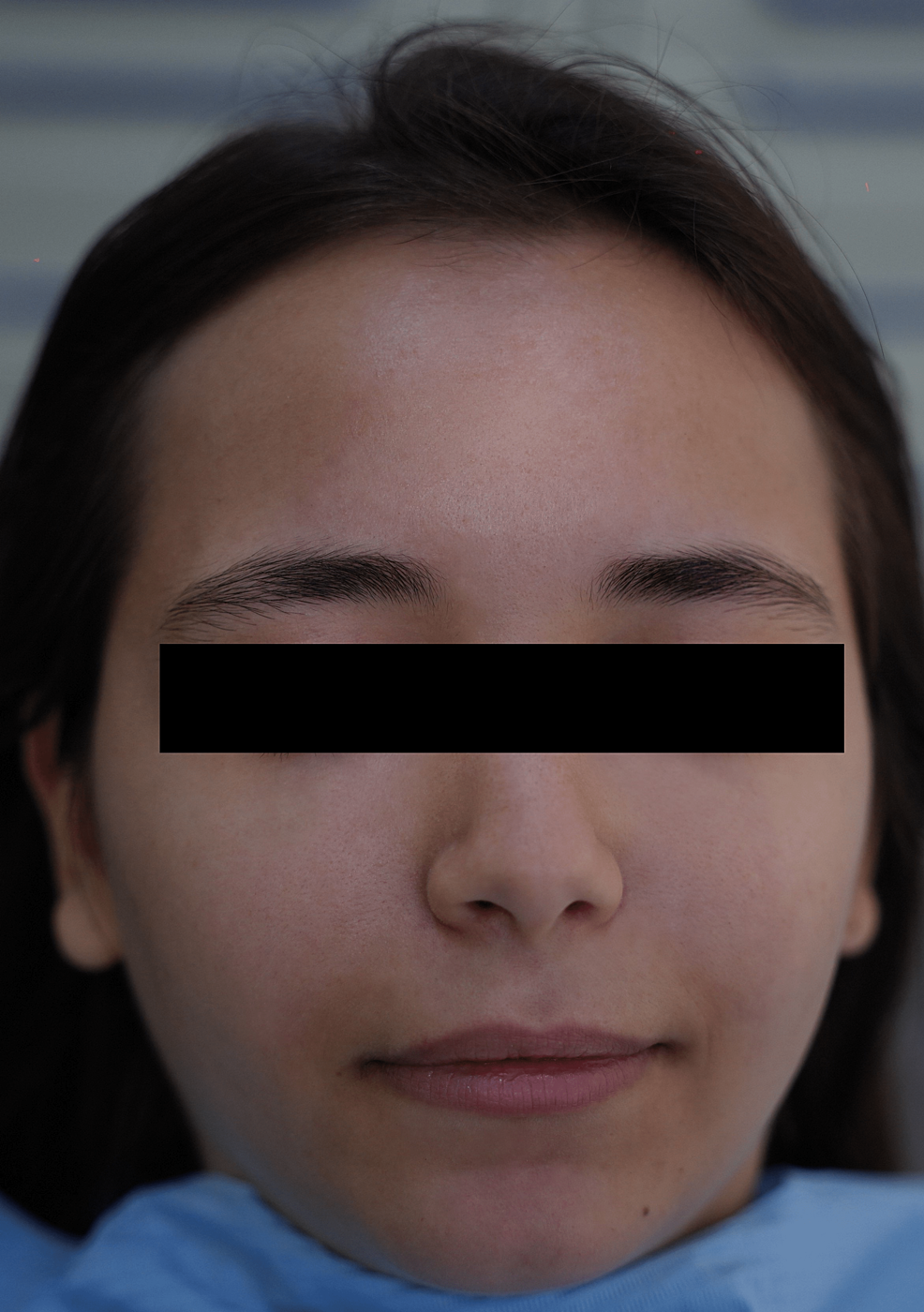 Figure
3: Clinical appearance of the face 48 hours after the third session.

This case report showed that the suggested treatment protocol combining three different wavelengths and the application of rejuvenating serum results in a significant improvement in facial aesthetics. As a result, there was an almost total disappearance of acne and pigmentation. Moreover, the patient and the operator were satisfied with the treatment and no side effects or discomfort were observed. Therefore, the treatment can be considered significantly effective and safe.

Several facts may explain the results obtained in our study. The 980 nm diode laser used at the beginning of the treatment served as preparation and heating of the skin, which must have increased the absorption of the serum later [12,13]. The heating performed by the 980 nm diode laser must have caused the pores to open [12,13]. Therefore, the cream was able to penetrate the deeper layers of the skin. The 405 nm wavelength has been used with the aim of increasing disinfection [14,15]. In fact, the 405 nm wavelength cleanses the skin by its well-documented bactericidal effect and its strong action against bacteria, viruses and fungi. [16]. Since acne-prone skin is known to have more bacterial load, disinfection with the 405nm wavelength must have been the key to treating acne. In addition, the 635 nm wavelength of the diode laser was used after the application of Gluage gel as a photobiomodulation (PBM) therapy. PBM is the therapeutic use of light to stimulate non-thermal modulation of living tissue [17]. This stimulated the production of collagen in the skin and improved the penetration of serum substances. This stimulation effect is obtained with the wavelength of 635 nm [17]. It is now well demonstrated that the mechanism of action of PBM is based on the stimulation of the enzyme cytochrome C oxidase, leading to an increase in the production of ATP [17,18]. In this protocol, PBM therapy with a wavelength of 635 nm resulted in stimulation of collagen fibers and vasodilation and therefore resulted in stimulation of the healing process and attenuation of the inflammatory process. Accordingly, this case report confirms that if the laser has been used according to the suggested protocol, a significant improvement in facial aesthetics can be observed. Several studies evaluating the effectiveness of diode laser in the management of acne and facial pigmentation can be found in the literature. For example, Rathod et al. showed that the 1450nm diode laser is effective and well-endowed in facial acne scars when used with low energy double pass [19]. However, contrary to our study, five sessions were used, whereas in our protocol, only three sessions were necessary for a satisfactory result. Additionally, other wavelengths can be used in the treatment of acne and facial pigmentation, such as carbon dioxide (CO2) laser. In this context, Manuskiatti et al. have shown that the use of carbon dioxide laser can notably improve atrophic acne scars [20]. In their systematic review, they showed that combination remedies should be evaluated for ice-pick type acne scars, and the use of dermocosmetics in preoperative and postoperative care may benefit patients. [20]. This is in line with our study, in which three different wavelengths and an application of rejuvenating serum were used to achieve a satisfactory result. However, one of the limitations of our study is that this protocol was performed on a single patient. Therefore, further investigations are encouraged to be performed within our protocol and treatment parameters.

The demand for cosmetic procedures is increasing dramatically around the world. Minimally invasive techniques used to improve facial aesthetics are becoming increasingly popular due to their lower complication rates and faster recovery compared to surgical procedures. According to this case report, the protocol consisting of in-office laser-assisted facial treatment with three different wavelengths, 980 nm, 405 nm and 635 nm (ST-Stomatology, Lasotronix, Poland), coupled with serum application rejuvenating concentrate, can be considered a safe and effective treatment for acne and facial pigmentation.